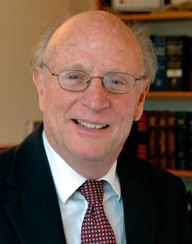 Of Counsel to the firm, Jim has been practicing law since 1972 in the specialized practice of Environmental, Water, Land Use, Natural Resources, Municipal, Real Estate, Toxic Tort, and Hazardous Waste Law. A graduate of Detroit College of Law (Michigan State University College of Law), he also earned a postgraduate Master of Law Degree from the University of Michigan Law School in Public Lands, Natural Resources and Environmental Law.

Jim has lectured at the Michigan Department of Natural Resources Leadership Institute, and at numerous professional associations, universities, and other organizations in the United States, Canada, and Brazil. He has written and published books, one on Michigan Environmental Law, and many articles on environmental and land use law.

Jim is a member of the American Bar Association and the Environmental Law Section of the State Bar of Michigan, licensed to practice law in Colorado, and President and Founder, FLOW For Love of Water, Great Lakes Water and Public Trust Policy Center. His awards include Michigan Lawyer of Year, State Bar Champion of Justice, and he is rated AV by Martindale Hubbell and is listed as a Michigan’s Super Lawyer.

Professional Presentations and Other Instruction

He has given the following presentations and instruction:

Jim has appeared as an attorney of record for one of the parties or an amicus in the following reported decisions: